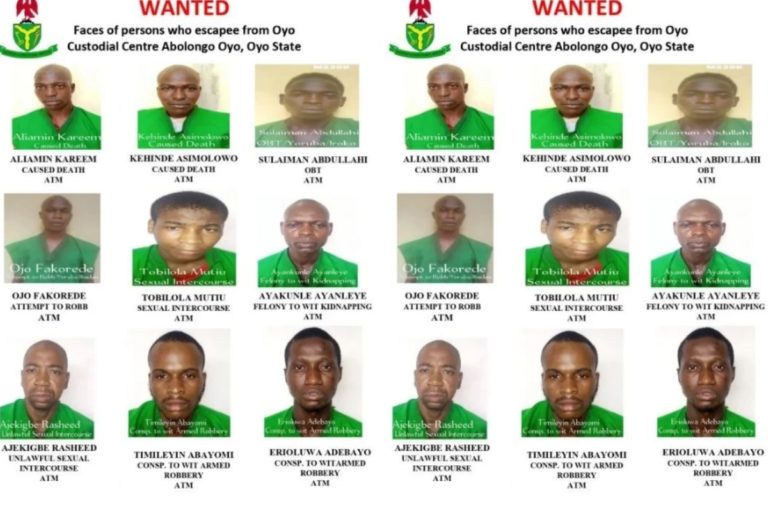 On Wednesday, October 27, the Nigerian Correctional Service revealed the identities and photos of 122 detainees who escaped from the Abolongo Custodial Centre in Oyo State.

Unidentified shooters assaulted the correctional center at 10 p.m. on Friday, October 22. The convicts were able to flee.

Rauf Aregbesola, the Minister of Interior, stated on Sunday that security agents had recaptured 446 of the 907 escapees from the Abologo penal institution in Oyo State.

“As at the last count, 446 of the escapees have been recaptured, leaving 392 still at large. We want to assure Nigerians that the service has an updated database of the escapees which includes their biometrics. We are sharing the database with all security agencies in the country including Interpol, so those who escape our recapture efforts can be nabbed,” the Minister stated.

“To those on the run, be assured you have nowhere to hide. You can run, but you can’t hide. We’ll fish you out! We are publishing details of those who escaped in the mass media so the public can assist in that effort.” he added.

In other news, Bishop George Nii Aryeh, the founder and head of Rivers of Life International Ministry, has pushed the Ghanaian government to construct sex chambers in all of the country’s prisons.

The man of God, speaking with Nyankonton Mu Nsem on Rainbow Radio 87.5Fm, declared that this will discourage lesbian and gay activity in Ghana jails.

According to Aryeh, the government should establish chambers in jails so that whenever a prisoner feels like they need sex, they can invite their partner and have sex with them.

He went on to say that it’s tough to go ten years in prison without having sex with a lover.

READ ALSO: ‘Never Marry A Lady Who Is Not Financially Stable’ – Men Advised

Humans, the bishop explained, have a need for sex every now and then, and when they don’t have their partners, they typically engage in gayism and lesbianism in our prisons.

The man of God clarified that this was not a prophecy, but rather an opinion he was expressing in order to assist reduce LGBTQI+ activity in our jails.

READ ALSO: Days After Trending Because She Snatched Someone’s Husband, BBNaija Star, Maria Drops A Video Of Her Having A High-Class Business Meeting

He argued that the lack of sex they receive from their prison companions is the reason why some people engage in same-sex relationships in prisons.